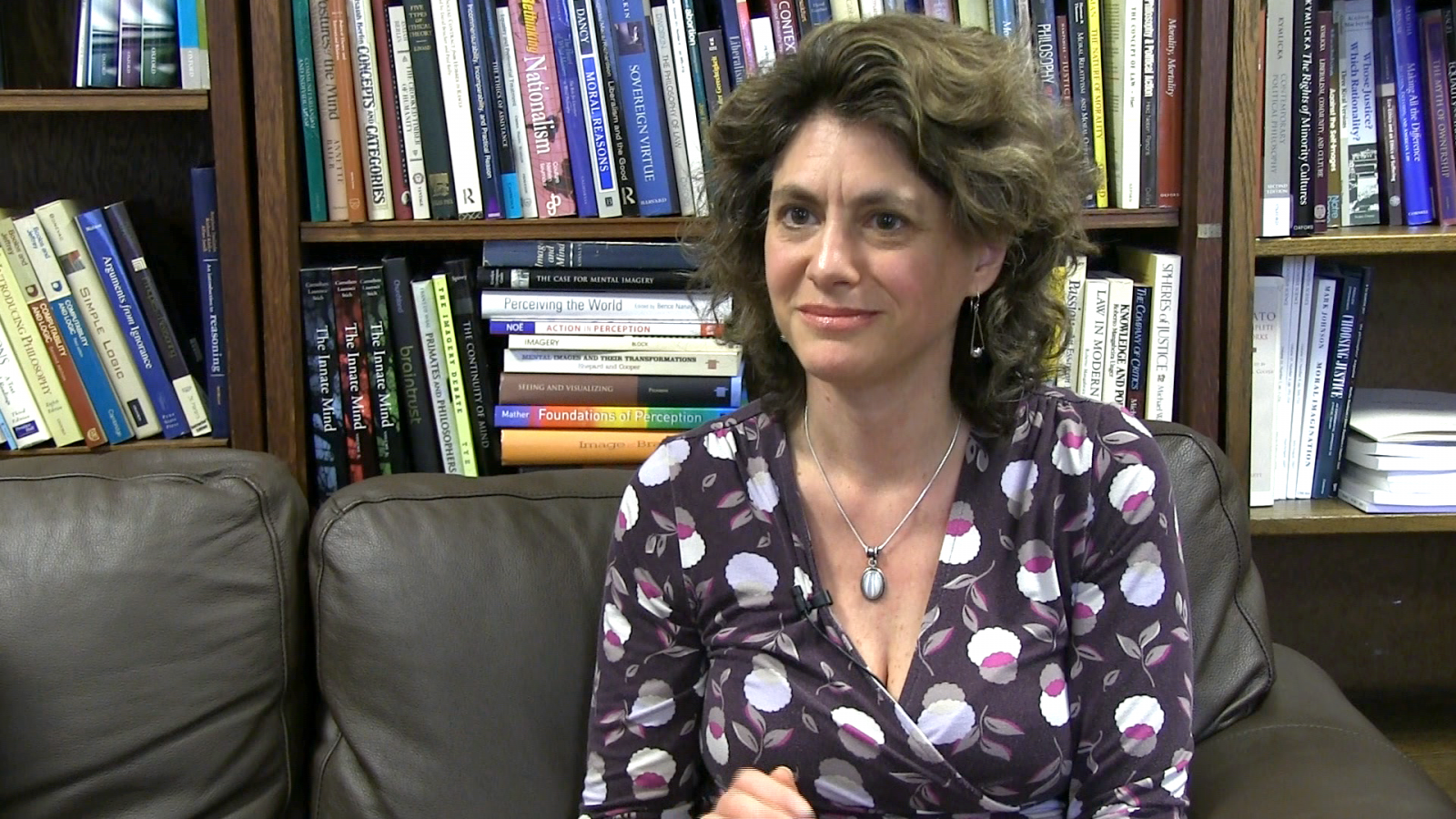 In her courses that often blend philosophy, psychology, and cognitive science, Tamar Gendler asks her students to probe some of life’s deepest questions using texts both ancient and modern. What she hopes they discover is that answers can be found in both, and that the rich textual tradition of which the students are a part helps them find and create meaning in their own lives. Gendler is the winner of the Yale College-Sidonie Miskimin Clauss ’75 Prize for Excellence in the Humanities.

What I absolutely adore about teaching at Yale is the receptivity of the students to questions and responses that cause them to challenge the ways that they’ve been thinking about their lives for the 18 or 20 or 25 years that they’ve been living before they got here. I’m constantly astonished by the willingness of students to ask deep, major questions about what allows them to flourish, what gives meaning to their lives, how it is that using texts from ancient and modern world traditions can help them answer questions that they care about, and how it is that coming up with their own answers to perpetual questions can help them find meaning in their lives and provide value to the communities around them.

Is there a teacher you’ve had who especially inspired you?

I have been so lucky in the teaching that I’ve had virtually all my life. I’m a big believer in the value of early childhood education in shaping experiences, and I was fortunate enough to have attended outstanding early childhood education programs. I had brilliant teachers in elementary school, and I went to a high school led by a visionary named Theodore Sizer, where I had a range of exceptionally talented and committed teachers. Then I was an undergraduate here at Yale in the mid-1980s and was inspired by people in the humanities program like Louis Dupré and Cyrus Hamlin and Ralph Hexter and by people in philosophy who went on to become my colleagues: people like Karsten Harries, Ruth Marcus, and Jonathan Lear. In graduate school I had an exhilarating team of dissertation directors: Derek Parfit, Hilary Putnam and — most powerfully — Robert Nozick. And throughout my life I’ve had and an amazing array of inspiring classmates from whom I’ve learned a tremendous amount. So I’ve really been absolutely blessed. I also had the incredible good fortune to come back to Yale as a full-time student five years ago and take classes under the Mellon New Directions Program, which allowed me to watch my colleagues teach and then have the experience, alongside my students, of being a student here.

One further influence on my teaching has been the opportunity to participate in various adult education programs. Thanks to introductions by my inspiring colleague Paul Bloom, I’ve been teaching for about seven years for an outfit called One Day University, and I’ve done lectures for something called Floating University, which is the source of the popular undergraduate seminar  “Great Big Ideas.” The opportunity to think about teaching adults — which is the perspective that those two experiences offered me — has been transformative to my teaching of undergraduates.

My students have taught me that not everybody thinks about things in the same way. When you are in graduate school you’re spending most of your time with people who think about questions in the way that you do. Part of what it is to acquire proficiency in a discipline is to be surrounded by individuals whose way of making sense of the world accords with your way of making sense of the world. It’s incredibly important that that happens: Disciplinary expertise is absolutely crucial for pushing forward the frontiers of knowledge. But what happens at the end of graduate education is the opportunity to take the ideas and ways of thinking that you’ve been exposed to and present them to people for whom that isn’t a natural way of thinking. I’ve learned from my students about the powers of the disciplines I’ve been trained in, and also about their limits.

If there’s one thing you’d like your students to learn from you, what would it be?

What I hope my students learn from me is that there’s a great written textual tradition that raises questions that still matter to our lives today. In my teaching, I try to pair the kind of texts you might read in a program like Directed Studies — works by people like Plato and Aristotle — with contemporary explorations of exactly the same sort of questions. What I want students to remember when they leave Yale is that it’s just a coincidence that they happen to be living at the same moment in time as the people with whom they currently share the planet, and that there’s a possibility that the person who has the most to say about the question that interests them actually inhabited the planet some time prior to them, perhaps some distance from them. I want to give my students the skills to approach texts that seem difficult in a way that lets them become accessible, through a kind of careful and close and serious attempt to engage in someone else’s perception of the way the world is.

In my “Philosophy and the Science of Human Nature” course, I do what I just described: I pair ancient or early modern texts from the Western philosophical tradition with approaches to those questions from another field. In the final assignment for that course I ask students to design a week of the class — I ask them to take a text or article or idea from one discipline and illuminate with a text, article, or idea from another discipline. Then I take the most exciting of those and I use them as topics for classes in subsequent years. The first time I did this in a large setting was three years ago when I was teaching “Philosophy and the Science of Human Nature” for Open Yale Courses. I had 150 students in the class that year, and so I got 150 of these assignments. As I began reading through them, I started to cry because they were so outstandingly creative, and they showed such openness to the world and such remarkable synthetic capacity on the part of the students. Even though I had a team of teaching assistants whose job it was to grade those assignments, I ended up reading through them all myself, and I can say without exaggeration that every single one of those final assignments was absolutely brilliant.

Hear Gendler talk about the study of philosophy at Yale.