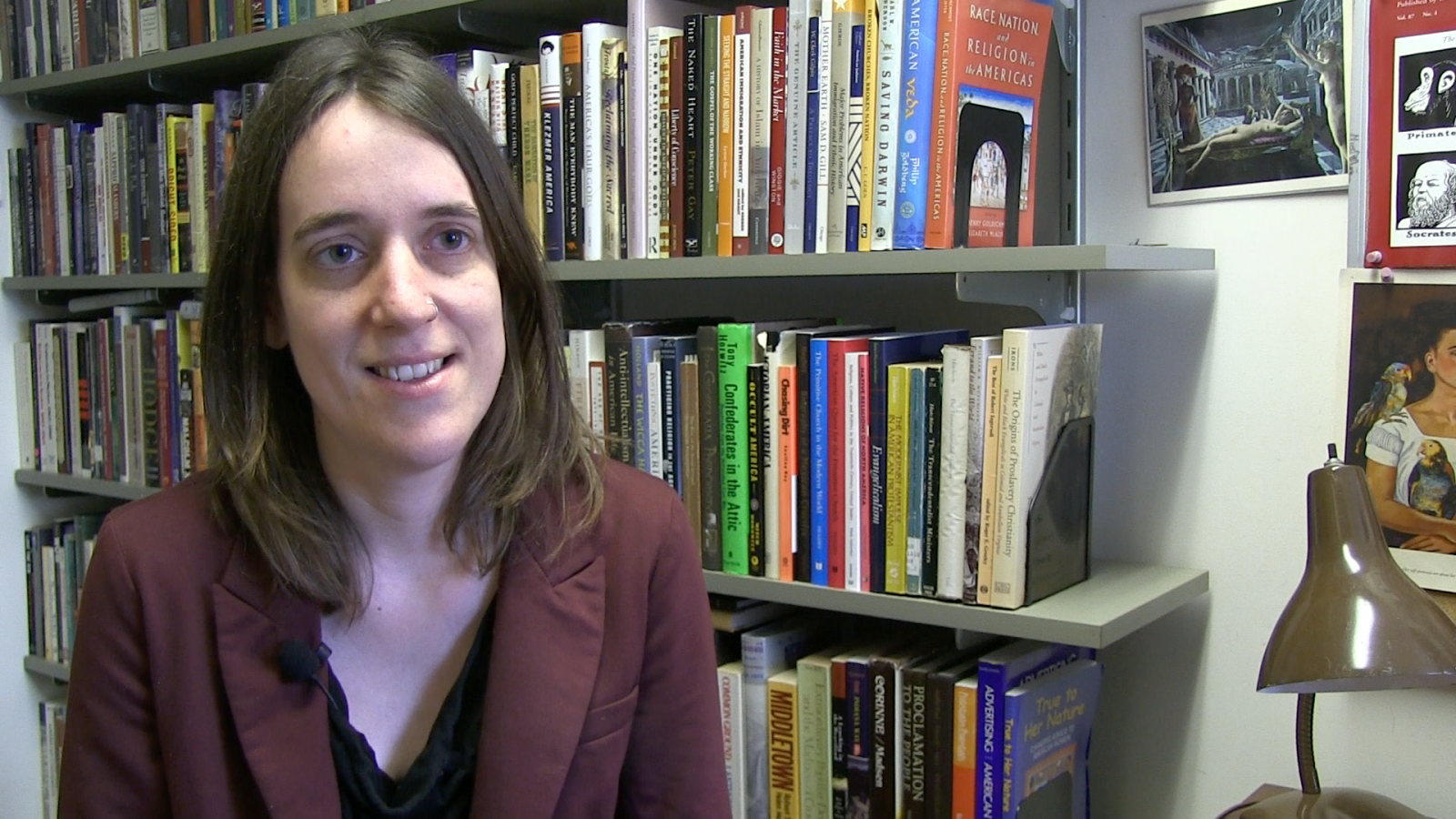 As they study religion and culture, Kathryn Lofton’s students re-think and re-make

As they study religion and its historical contexts in Kathryn Lofton’s courses, students also examine the ways in which their own personal and social identities are shaped by the culture of the times. Lofton — professor of religious studies, American studies, history, and divinity — reminds her students that they also have the power and responsibility to re-make themselves and all they are a part of.

What I love about teaching at Yale is that the students are really game. They come here wanting to have an experience. As a student of religion, I love that desire. And I hope that it is fulfilled, and that together we’ll create something in the classroom that will actually transform them, and make them think differently. Yale students enter college with a combination of extreme confidence and extreme anxiety, and I tend to think that the best classes capitalize on both to diagnose their rightness and wrongness — that there are good reasons to be nervous in this life, though maybe not for the reasons they think, and that there are good reasons to possess confidence, but maybe not for the reasons they think. So I think the general enthusiasm of the students is pretty incomparable, and I feel I have to be at the top of my game in order to be able serve their excitement, their confusions, and their ability, and also to maximize my capacity to ask questions of myself as I unfold my work alongside theirs.

Is there a teacher you’ve had who especially inspired you?

I think a lot about someone I am not. I had a teacher my freshman year of college who was amazing: very precise, very slow, and incredibly distant from his students, yet profoundly inspiring to my own work. He had this grand formalism to the way he treated the class. There would be a lot of silence, but the silence never felt awkward. We were all waiting to come to a really good thought — not just any thought — and he set a very high bar for conversation on some hard material by Kant, Aristotle, and Dostoevsky. None of us were masters of this material but by the end of class it somehow permeated how we spoke to each other even outside of class. On a regular basis I think of him and hope I achieve some small corner of what he gave to me.

Every summer, I reflect on the classes that I had taught that year. I take notes on specific classes and I think about revising elements of the syllabus and I set goals for things I want to read about — different kinds of pedagogical issues. Since I’ve been at Yale, the things I have most often been inspired to think about are new forms of technology, new forms of entertainment, new forms of art and culture. The thing that’s amazing about Yale students it that they themselves are producing at the edge of culture: They are wanting to write plays that will go to Broadway; they are writing skits that they want to see on late-night comedy; they are writing poems they hope will be published in Poetry magazine. They have huge ambitions, and they are working very hard at the edge of current thought. That part makes me want to learn about those edges so we can theorize together about why those have become the new sites of rebellion, re-thinking, aesthetics, and entertainment — and at the same time help me decide, too, what would be the best texts to teach them that are maybe conservative or older and that would perhaps remind them where the forms that they’re using have come from.

If there is one thing that you want your students to learn from you, what would that be?

I want students to know when they leave my classroom that everything they see in this life is something that they can reply to and re-think. I think that we live, particularly now, in an age where social media determines so much of our social interactions, where so many corporations seem to run so many of our consumer choices that it might seem as if so many things have been decided upon for us and it’s just the way it is: This is the way you make a friend; this is the kind of coffee table that’s cool; this is the kind of relationship that makes sense; this is the kind of career goal I should have. I hope my students know at the end of every class that there is nothing that they have to do other than continually question the way the world is made and challenge themselves to participate in making and re-making it, but understanding that there is no vision — personal, professional, ethical, emotional, or sexual — that is not also a revision, a requesting to remake the world again because it is our responsibility to do so.

My students know how wary I am about singular experiences and their personal narration — I tend to think anything that is instantaneously amazing is more akin to evangelical pleasure than enlightened labor. That said, this past semester students in my “Religion and Popular Culture” class had to nominate objects for us to evaluate, and the day someone showed videos from “Killer Karaoke,” a reality TV show whose title explains its basic terrorist content, I was in such naïve shock at what I watched I was quite literally dumbfounded. However, the students were amazing, taking it up in arch detail and explaining the content of its resonance while also interrogating the consequences of its popularity. They took it into their own hands, and kept a high standard of analysis without me steering the ship. That’s when you know that what you’re doing is working.

Lofton was also honored with a 2013 Graduate Mentoring Award.